Water Damaged Desktop no match for the Doctor’s skills (and a ton of elbow grease).

This is the worst water damaged desktop I’ve ever been asked to attempt to make better.  A chronically leaky roof has ruined the lacquer and caused severe “blushing,” that is, moisture trapped underneath the finish coat of lacquer causing a nasty, white haze.  This is not unlike a wet white ring on a coffee table but much, much more severe.  New chemical technology plus a slight backache hours later allowed me to repair this desktop to like new appearance without having to strip and refinish.  This saved the customer hundreds of dollars and time without the need for refinishing.  The dollar bills on the table were not a tip; they were used to show me the scale of the damage through sending photos before I came out. 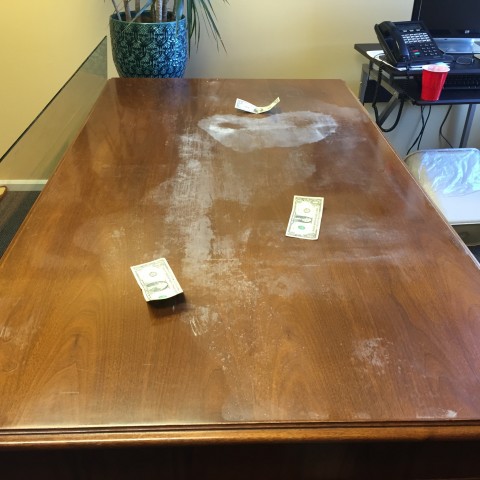